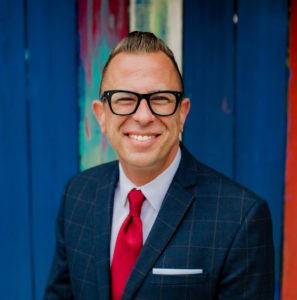 BACKGROUND: Medically-retired Navy Mineman, Victor E. Martin, is an advocate, educator and keynote speaker focused on veteran issues related to active-duty service members transitioning into civilian/veteran life and on those struggling with reintegration while living with mental health diagnoses. Through his own experiences, he has developed a level of understanding, patience and empathy that allows for true peer-to-peer mentorship and leadership.

Mr. Martin holds numerous leadership positions within the community, to include: 2022-2023 Commander at American Legion Post 275 in La Jolla, Executive Director at Warrior Resource Project, and Professional Mentor at the University of California San Marcos School of Business.  He is honored to have spoken to thousands of people, at hundreds of locations, about mental illness and what we can do to better support our own mental health through the use of various tools; including therapy, yoga, hiking, art, and gardening.   Currently, Mr. Martin resides in La Mesa with his wife Kacy, and is father to son Rawley and two daughters, Violet and Skarlet.

Comments Off on MOWW January Luncheon

I thanked the commanders and chapters for the following: continuing recruiting, Chapter Action Plans, and submitting annual IRS reports on time. I thanked Southern CA Dept. Commander Dan Kash and Chuck Palmer for financing the recent FORCE-CON 2022, a salute to and honoring of all our military in San Diego. Thank you to so many on the San Diego Massing of the Colors team this past Oct. 15.

VCINC Comments and National Updates: Dave Worley
The Strategic Planning Committee continues to revise the National Strategic Goals. Soon, National will provide marketing and branding tools for each chapter to use. National continues to look for ways to better support the chapters.

Speaker: LTC Dieter Dupont, USA (Ret)
Dieter presented a well-researched and organized brief on the situation in Ukraine. His brief provided historical context of Ukraine, its relationship to the USSR and Russia, and provided a current assessment of the war situation today. His brief covered three broad topics:

A copy of Dieter’s brief may be requested by emailing him at DuPont@USA.com

Chapter Sharing and Training Topics
PCINC Dave Gibson from Puget Sound Chapter provided an update on their successful recruiting process. They have a formal recruiting team who use a list of prospective companions. Each year they have generally recruited 10-20 new companions. Efforts have included welcoming prospective new companions with the following steps. Some 1-on-1 time with the Chapter Commander, presenting the prospective new member with chapter news, and a commemorative photo with the Chapter Commander. Have the membership applications pre-filled to make the joining process easier at the meeting or shortly afterward. Dave recommended use of Facebook for outreach as it permits wide access, and allows chapters to post photos, news and announce upcoming events. Have patience because recruiting may take a year or two. And follow up!

Georgett Studnicka from Bradley-Hanson Chapter offered that she is pursuing new members through civic and professional organizations including non-profit organizations local to her area. She has found that it is common for these organizations to have active duty military and veterans among their members. She has visited the Chamber of Commerce and will be visiting Kiwanis to seek out new members.

San Diego Chapter Commander Barbara Peralta provided a review of the 66th Annual Massing of the Colors and Service of Remembrance held on Saturday, October 15, 2022 at the U.S. Army of the West Mormon Battalion Historic Site in Old Town San Diego. Janet Chin, Civilian Aide to the Secretary of the Army (CA-Coastal South) was the keynote speaker and the event was highlighted by the participation of the U.S. Marine Corps Band, and Color Guards from JROTC and ROTC units, Boy Scouts and Girl Scouts Troops, and patriotic organizations. The ice cream social that followed the ceremony was a hit. Next year the Chapter-sponsored Massing of the Colors will be held at the Organ Pavilion in Balboa Park on Saturday, October 14th.

Holland Chapter Commander Paul Lebidine spoke of recruiting through their planned YLS, and using YLS as a venue to develop leaders among local youth and as a venue to attract new members. They plan a YLS staff of 28-35 year olds.

We typically do 2 flights per year at the cost of $300,000 per trip (the veteran does not pay for his/her flight). The community was very generous this year, so we had enough funding for 3 trips this year. Long range, our trips depend on funding. We are 100% donor funded as we receive no government funding and we are 100% volunteer staffed. So, right now we know our April flight will be WWII/Korea/Vietnam eras and it will be April 28-30. Past April is TBD.

Gaylord-Dillingham Chapter Commander Jason Seal offered some lessons learned and best practices for conducting a YLS. A key first step is to locate a venue. Sending out a “Letter of Instruction” no later than six weeks prior to the planned event will give organizers enough lead time to finalize YLS-associated events.

Ted chose the Puget Sound Chapter after considering several chapters. Over two years, 2020-2022, the Puget Sound Chapter team led by Chapter Commander LTC Heinz Haskins accomplished dozens of outreach events, recruited many many companions, and received national recognition for 15 of their outreach programs. Plus they placed in the top three chapters twice for the GA John J. Pershing Chapter of the Year Award.

Open Forum
CSM Jon Church shared some of the Woolsey Chapter outreach to minority youth as part of their many outreach programs.

CAPT Quinn Hawley from the Wright Chapter shared that they are planning a one-day “Inland Empire Leadership Conference,” a scaled version of a YLS in the spring at the California Military Institute. The intent will be similar to a YLS: develop youth leadership, teach team and rapport-building, instill patriotism. 100-150 participants are expected.

VCINC Worley urged every chapter to visit the Hoover Institution Library & Archives at Stanford University, near Palo Alto, CA where MOWW records are archived. They can be downloaded by chapter. Make a reservation about a month in advance.

Next year’s National Convention will be in Annapolis, MD, followed by Valley Forge, Pennsylvania in 2024.

Comments Off on Much Learning: Ukraine War Updates, Chapter Sharing and Training!

From Top Secret to Topspins 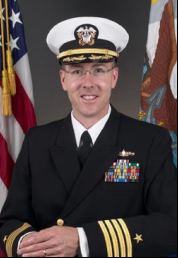 San Diego’s MOWW is honored to welcome Capt. Kappes as our keynote speaker in November.

Steve spent decades using intelligence to improve our national security.  Now, he uses tennis to improve the lives of wounded, ill, and injured service members, veterans and their families. He will discuss his career and how it led him to serve others through the sport he loves.

Steve is the co-founder and Director of the San Diego Wounded Warrior Tennis Program, and he has been a very active member of our local veteran community for 14 years.  Prior to that, he served 24 years as a Surface Warfare qualified Intelligence Officer in assignments around the world.

We are grateful to the San Diego Unified School District for hosting this month’s meeting.

BACKGROUND: Captain Steve Kappes served 24 years in the Navy as a Surface Warfare qualified Intelligence Officer. He served ashore in the U.S. and overseas, and at sea with deployments to the Pacific Ocean, Indian Ocean, Mediterranean Sea, and combat zones in the Middle East. He led teams of hundreds of intelligence analysts who provided tactical level intelligence used in combat and peacekeeping operations, and provided intelligence support to fleet and multi-service intelligence centers and national intelligence agencies that influenced military operations worldwide.   He also served as the Principal Intelligence Advisor to senior Navy leaders in the Pentagon working on long-range strategic plans.

Following his Navy career, Steve continued to support deployed naval forces through his work as a Program Manager and Director at KAB Laboratories and Epsilon Systems Solutions, San Diego-based defense contractors that provide software, systems engineering, and training products and services to the Navy and other government clients.

As a volunteer, Steve co-founded and directs the San Diego Wounded Warrior Tennis Program which uses tennis a means of physical and emotional rehabilitation and community reintegration for wounded, ill, and injured service members and veterans from across the country. Over 1,000 disabled service members and veterans have benefitted from this program since its inception in 2009.

Steve also serves on the Board of Directors for three community tennis organizations and for Zero8Hundred, a nonprofit veteran service organization that helps military members, veterans, and their families transition from active duty to civilian life. He is currently earning a master’s degree in Nonprofit Leadership and Management from the University of San Diego in preparation for a career in the social impact sector.

Comments Off on MOWW November Meeting